Urushi, also known as Japanese lacquer, is a natural resin-based paint and is mostly made up of a substance called urushiol.

Urushi lacquer is most commonly used as a coating.

Urushi-lacquer coating, characterized by its glossy black appearance, has been recognized as a traditional craft for its beauty and toughness, and it is used in kitchenware, high-end furniture, musical instruments, and many other areas.

Joboji Lacquer: An introduction to the urushi lacquer of Joboji, the largest producer of domestically produced urushi

Urushi is a symbol of Japanese characteristics.

Urushi is close to people’s lives in Japan today, but it has a long history—its roots go back to about 9,000 years ago.

Urushi has long been a part of people’s day-to-day lives, through its use in utensils of various types, as construction material, and as artisanal-craft material.

However, the production volume of raw urushi is currently very low.

Joboji in Iwate Prefecture is the number-one location of urushi production in Japan, producing about 80% of domestically produced Japanese lacquer.

Meanwhile, 98% of the lacquer used in Japan is imported from abroad.

The small amount of domestically produced lacquer is produced in regions such as Iwate Prefecture, Ibaraki Prefecture, and Niigata Prefecture. Among these locations, Joboji is the only location where a team of lacquer-gathering artisans makes a coordinated effort to produce rather large amounts of lacquer. 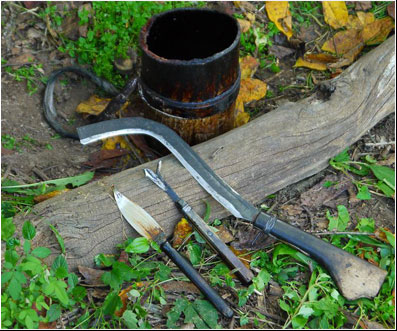 Lacquer is gathered every single day—except when it is raining—from mid-June to mid-October.

It takes about 15–20 years for an urushi tree to mature from when it is planted as a seedling.

A mature urushi tree yields no more than about 200 grams (about 7 ounces) of urushi lacquer.

After spending about six months collecting all the lacquer that a tree can yield (about 7 ounces), that tree is cut down. This is done in order to start the next cycle (i.e., growing the next urushi tree).

Here are the tools you need to gather urushi lacquer: a scythe to remove the tree’s outer bark, a special knife to cut horizontal slits into the tree, a spatula to receive the secreted lacquer, and a bucket called a “takappo” to collect the lacquer. 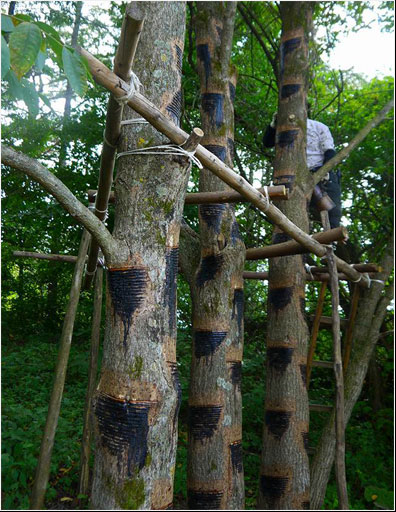 After using the scythe to remove the outer bark, the special knife is used to make about 10 small slits on the outer-bark-free surface.

The purpose of these small slits is to stimulate the tree to secrete lacquer. They also serve to indicate where the lacquer gatherer should make the second and subsequent slits.

The second slit is made in the vicinity of each of the 10 small initial slits to collect lacquer. Subsequent slits are made in the same way.

As soon as a slit is cut, the tree starts to secrete milky-white lacquer.

The gatherer receives the secreted lacquer with the spatula and transfers it to the bucket drop by drop. This routine task is carried out every day for many days. 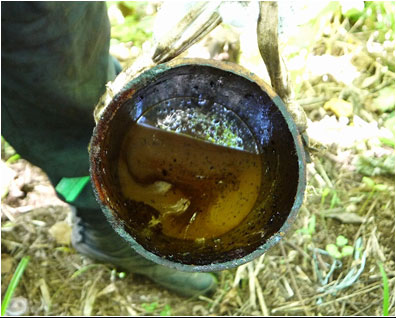 With roots dating back about 9,000 years to the early Jomon Period in Japan, urushi lacquer boasts a long history and has created a traditional culture that is indispensable to people’s lives. However, due to economic reasons, lacquer-gathering artisans have decreased in recent years. Today, only 2% of the amount of lacquer consumed in Japan is actually produced in Japan. 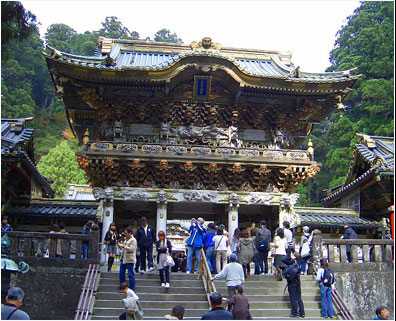 Nevertheless, Joboji Lacquer is essential not only to the day-to-day activities of lacquer artisans but also to the repairs and restorations of National Treasures and Important Cultural Properties, such as the Shrines and Temples of Nikko, including Nikko Toshogu Shrine; the Konjiki-do of Chuson-ji in Iwate Prefecture; and the Kinkaku of Rokuon-ji in Kyoto.

Maki-e is a uniquely Japanese artisanal craft that involves first drawing a pattern or design using lacquer on the surface of a utensil. Gold powder, silver powder, or some other kind of decoration is then sprinkled and fixed on top of the lacquered layer.