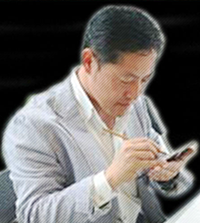 Participated in a Japan-France cultural-exchange event for maki-e at the Ritz Hotel in Paris.

Created custom-made YAMAHA guitar and many other items.

Held an exhibit at the University of the Arts London.

Held an art-exhibition workshop at the University of Oxford’s Ashmolean Museum.

Assisted in the JAPANESE GOLD DECORATION Exhibition at the Japanese Embassy in London.

“Maki-e is a culture that represents Japan. This is what I think as I dedicate my life to maki-e.”