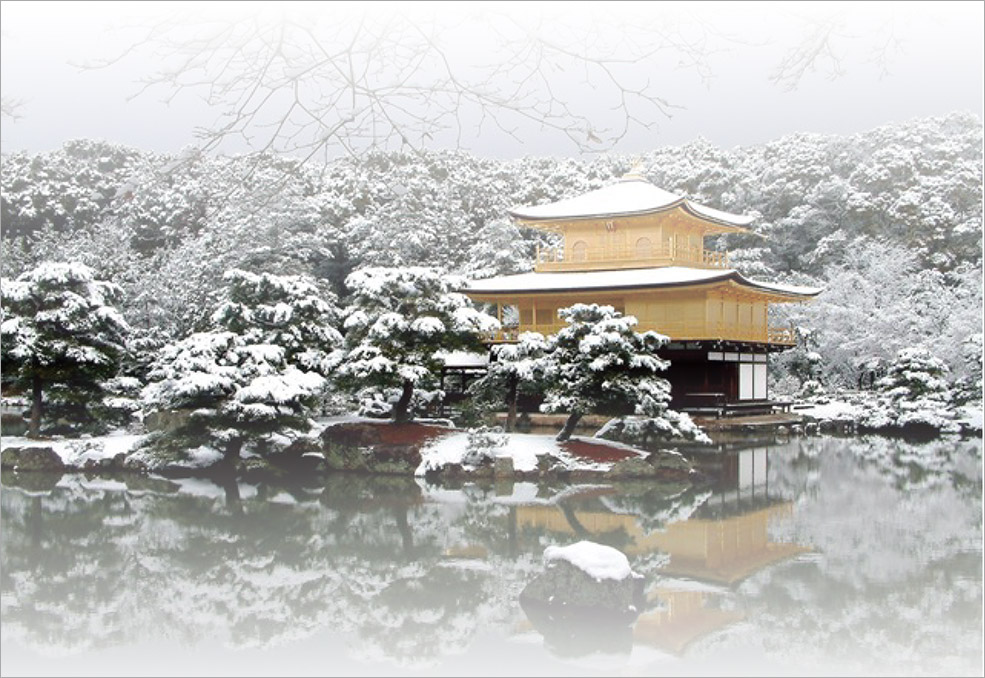 An excerpt from “NHK Project X—Heroes with Relentless Fighting Spirits Tear Down the Walls to Overcome Challenges: The Rebuilding of Kinkaku-ji” “Joboji Lacquer” Kinkaku-ji became adorned with a jet-black lacquer coating that had been thoroughly polished.

The sight was beautiful enough to make you let out a sigh of admiration. A monk who saw the urushi-black Kinkaku frankly said, “Maybe there is more artistic value to this if we didn’t add another gold-foil layer to it.”

An excerpt from “NHK Project X—Heroes with Relentless Fighting Spirits Tear Down the Walls to Overcome Challenges: The Rebuilding of Kinkaku-ji”

“The finest lacquer awakens from dormancy.”

They had settled on which gold foil to use. Now, it was time to decide on the lacquer. Because the “Quintuple-Thickness Foil” they would be using was five times as thick as standard foil, it would of course weigh five times more, too.

This meant that they would need a special lacquer with strong adhesion. From all over the world, Yaguchi had gathered lacquer that was reputed to be of high quality—from China, Taiwan...

Yaguchi painted each sample of lacquer on some wood and left it for 100 hours to test its strength after drying. He also exposed it to rain.

This was because Kinkaku-ji is located next to a pond, and so the lacquer needs to be resistant to humidity.

The first ones to fail the test were the lacquer samples from China and Taiwan, which, after being dried, could not stick to and hold the pieces of gold foil that were laid over them for any significant amount of time.

Yaguchi subsequently found that all of the other lacquers that he had gathered also lost their adhesive strengths once exposed to the rain.

Yaguchi was at a loss; he had to find other options. A few days later, Yaguchi received some lacquer that was sent to him from an artisan he knew.

The name of the lacquer was “Joboji Lacquer.”

Yaguchi’s expression changed when he started experimenting with this new lacquer.

The adhesive strength was amazing.

Once painted, this lacquer did not come off even when scraped with a 10-yen coin.

It took a very long time to dry, but once dried, its strength actually increased day by day, whether it was exposed to the rain or not.

Yaguchi quietly asked himself, “What on earth is this lacquer?” Soon thereafter, Yaguchi was heading for the mountains in Iwate Prefecture, where the lacquer had been produced.

There, a certain man awaited him.

He has stayed in this mountainous area for over four decades since he first arrived at the age of 14.

He is now called the “Lacquer Demon.” When Yaguchi arrived, Iwadate was indeed right in the middle of gathering lacquer.

After a short introduction, Iwadate was already showing Yaguchi his exquisite lacquer-gathering skills.

A slit cut too deep to extract some urushi lacquer from an urushi tree would kill the tree.

Iwadate was using his favorite knife to cut a slit that was exactly five millimeters deep to collect the lacquer.

Iwadate proudly explained to an impressed Yaguchi, “If you cut even one millimeter too deep, you might get a lot of lacquer that year, but it will undermine both the quantity and the quality of the lacquer you can get from that tree from the next year onward.

On the other hand, if you cut even one millimeter too shallow, not only will you not be able to get enough lacquer, but the lacquer’s stickiness will also be insufficient. This is why you need to cut exactly five millimeters deep.” When he finished speaking, Iwadate walked back toward a tree to continue his work.

He resumed making five-millimeter-deep cuts, and he made it look so easy. And as he did so, the Joboji Lacquer, known for its amazing adhesive strength, started flowing down the tree’s surface.

“Are you able to set aside such a large amount?” Iwadate listened with his arms crossed.

The amount of Joboji Lacquer produced annually was only 2.2 tons, so more than half of this amount would have to be set aside for the Kinkaku restoration project. Yaguchi vehemently appealed how desperately he was in need of the Joboji Lacquer for Kinkaku’s restoration.

When Yaguchi finished speaking, Iwadate, who had been listening carefully, soberly said to Yaguchi, “Come here.” Yaguchi then followed Iwadate to a storehouse that stored lacquer.

When Iwadate told Yaguchi to look inside and Yaguchi did so, he could but let out a gasp of surprise.

He saw so many barrels of Joboji Lacquer stacked high on top of each other.

Iwadate then started to explain the situation in a plain manner, “It’s really hard to sell domestically produced lacquer these days because of the dominance of cheap foreign lacquer. Last year, for example, 99% of the lacquer used in Japan was produced overseas, leaving only 1% to be supplied by domestic producers. No matter how hard we work and gather Joboji Lacquer, most of it goes unsold and is left sleeping in a storehouse like this. So when I heard about the Kinkaku-ji project, I was really pleased because I figured I could finally give this lacquer ‘a place in the sun.’ Take as much as you want. The lacquer, too, would much prefer your taking it away than being left to sleep here.”

Every work had such a smooth and finely textured finish. “Please use Joboji Lacquer to revive Kinkaku,” said Iwadate as he moved forward to shake Yaguchi’s hand.

As they shook hands, Yaguchi bowed sincerely—he had just successfully procured for his project the best available materials: Quintuple-Thickness Foil and Joboji Lacquer.