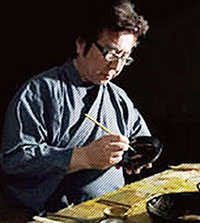 Succeeding his father in the second generation of the family business, Kazuo Fujisawa started as a Buddhist-altar maki-e painter but later branched out into the area of maki-e craft and has been hosting “Shinshu Urushi Studio—Aya.”

In 2003, he released “Bi-sai,” the first maki-e watch in Japan that was entirely domestically produced.

The dial on this masterpiece embodies the most exquisite detail that is achievable through maki-e techniques.

“I try to engage in artisanship that brings new energy into our everyday lives so that our children would want to inherit such a profession. I will also try to integrate what I have now with new areas.”